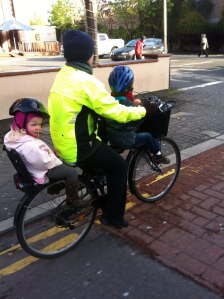 Are you trying to figure out the best way to bring your kids with you on the bike? What about going for a ride with more than one kid on your bike? What are the best child seats out there before your kids get going on two wheels themselves? Read on to find out how we went from pushing buggies to 3 on a bike (oh and a dog too..!)

One of the great rites of passage of growing up is learning to cycle. As adults, we all take it for granted but watching my kids learn to cycle was special because I knew that from that day on, they would be able to enjoy the freedom that cycling bestows. Not that they would think that of course. To them, it’s now an effortless endeavour and they don’t even give it a second thought when they pedal off down the road. However, they still climb aboard our bikes and will continue to do so as long as our legs and their heads allow.

As the offspring of two cycling parents, the kids had no real choice in becoming passengers on board our bikes once they were old enough to hold their heads up. We went through a number of different “solutions” as their needs (and weight!) changed along the way. At all times, we had safety, comfort and fun in mind as we pushed off with one or two of the kids on board.

Like most, we started with the big plastic seat at the back of the bike. I couldn’t see the kids, talk to them, shout at them or pass back a bribe/tissue without risking a serious speed wobble. On top of that, the seat looked awful and took up more space in the shed than the lawnmower. Oh yeah, and enjoy trying to hitch one of them on to the car rack with another bike.

So then we discovered the Weeride. This little beauty was the business. The child is in front of you so you have so much more control. The interaction with the kids is fantastic as you can chat into their ear, wipe their nose, slip them a drink and point out the world going by as you see it. We (all) smiled more and looked forward to our spins now.

The removable seat was really, really handy when dropping the kids at creche. I could then head on to work without the baby seat attached which was great. We even bought a second bracket so we could switch the seat between our bikes depending on who was the weerider in chief for that day.

The bracket itself is quite sturdy so it does add some weight to your bike but that’s about the only thing approaching a negative I could mention from my weerider years. When our two outgrew the weerider, we passed it on to their cousin so it has had a good life on the highways and byways of Dublin and London!

Following the weeride, I went out and got myself one of those “top tube” seats, so that the kids could still be out front but with a much smaller presence in terms of the seat. One thing I did do was get the backrest hacked off so that I could cycle more comfortably when riding solo. Before that, I found I couldn’t stand up on the pedals without risking doing some serious damage to myself below the waist. This backless seat is still going strong on my bike and is maintenance free. You’ll pick one up in your local bike shop for €30 or so. Ask nicely and they might do the hacking for you. 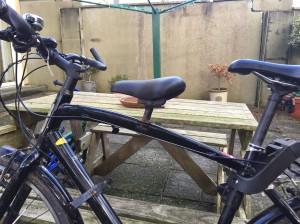 That’s all fine and dandy for you but what about the crossbar-less ladies I hear you ask? Yes, my wife’s bike had lots of things but a crossbar wasn’t one of them. So I went looking for a top tube seat for a bike without a top tube. I know. As usual someone had thought of this before and I eventually hit the jackpot when I landed at bikebude24.de. Some German engineering from the old East Germany (DDR) combined with a good search engine and we were sorted.

The good people at Bikebude were super helpful (I sent them emails in German using Google Translate… ). They asked me to send on pictures of the bike to see if it was compatible (it was) and gave great advice. They have an online instruction manual but my German from school was a bit rusty so with a bit of translating and cutting and pasting, I made a crude English version of the instruction manual to follow.

I have lost count of how many people came up to us asking about it and where they could get one. Well now you know. Say hello to them on Facebook.

Our next trick was to get another child on board. This meant having to utilise the back of the bike again. I wasn’t going to go back to the Plastic Wobbler type seats so something more elegant was required. Move aside German precision, it’s time for some Dutch pragmatism. The Bobike Junior

was exactly what the doctor ordered. It comfortably carried a child (or bag, box etc with some bungee cords) and it folded away neatly when not carrying passengers. It can be detached from the bike within a minute so it could be swapped between our bikes in a jiffy. This also came in handy if the kids were being dropped anywhere for a couple of hours (creche etc). We got ours from the wonderful Astrid at the Dutch Bike Shop. I highly recommend them. 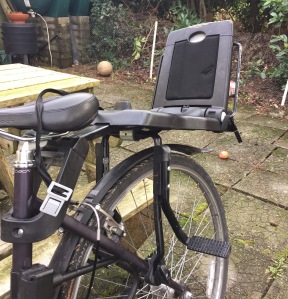 The addition of a dog in the front basket made this bike a bit of a celebrity on the streets of Killarney for a while. Trigger happy camera wielding tourists were known to take snaps of the cute dog in the basket – much to the chagrin of the driver and passengers!

So there you have it. We’ve come a long way from the early days of rear mounted plastic wobblers.